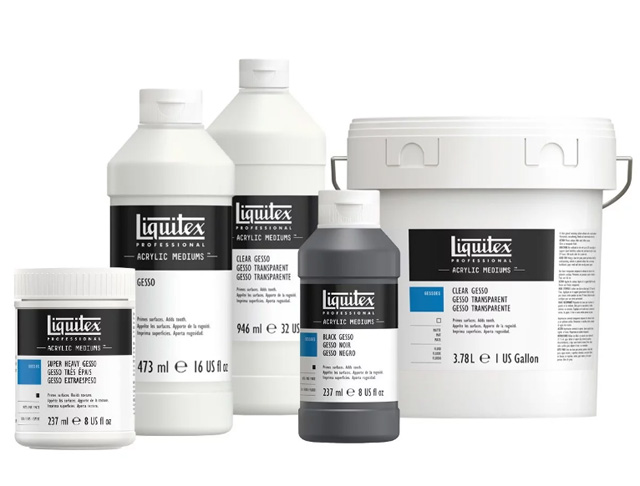 I recently did some work on a metal tin shrine, and used a spray primer. My patrons on Patreon commented on that information, so I decided to put together this short primer on primers for mixed media artists.

A primer is a substance used as a prep coat on a previously unpainted surface. It’s usually used to create a paintable ground, to prevent the absorption of subsequent layers of paint, or to deter the development of rust. So, a primer is something that goes over your blank surface, like canvas, paper or metal, and under paint.

If you’ve run into trouble with paint scraping off a surface, chances are a primer will fix your problem. If you’re working with metal or plastic, and want to paint with acrylics, primer is definitely in order.

You generally want to match your primer to whatever surface you’re using, to ensure your layers of paint really stick to it.

Here are some of the primers I have in my arsenal:

Gesso (or acrylic gesso, which is the most common type) is a primer designed for use on canvas or paper, as surface prep for painting with acrylics or oils. It comes in white, black and clear in most art supply stores, and may also be available in colors. It is generally matte and opaque (except clear gesso, which is transparent).

Sandable spray primer is an automotive product, ideal for priming metal. It generally performs two functions: it gives metal a texture that will grab paint (including other sprays, and brush on acrylics), and it deters rust. It comes in standard gray, white and black, and a few colors, depending on where you shop. Like most sprays, this stuff should be used outside, or where there is adequate ventilation.

Model primer is designed for plastic, and makes a great paintable ground for all those little plastic found objects that need painting. Most hard plastics, and even soft plastics, can be given a light coat of model primer, and then painted with sprays or acrylics. Like most sprays, be sure to use this where there is adequate ventilation.

I’m just going to drop this down here at the end, because matte medium isn’t really a primer—but I do use a light coat of it, thinned with a bit of water, as the first coat on any wood projects where I want the bare wood to show. It’s more of a sealer than a primer, but I use it mostly to keep paint from being absorbed into the wood.

What other surfaces or primers do you want to know about? Leave a comment below!

1 thought on “A Primer on Primers”